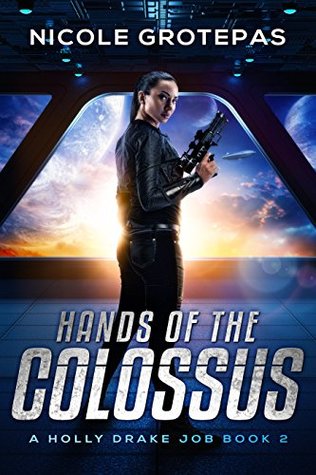 Holly Drake just wants a simple thing–to destroy the Shadow Coalition and the evil at the heart of their business. Using tip-offs from the secretive government official pulling her strings, Holly and her crew swoop in, break up the cash drops and steal the money. If one or two baddies die on accident, no big loss. Right? Holly could do this forever, picking the Coalition apart till not even bones remain.

Until someone goes missing. In that moment, everything changes.

To save the victim, Holly and her team will put everything on the line to penetrate the mysterious Shadow Coalition and stab at their enigmatic leadership: the Hands who protect the Heart. Treacherous journeys across the 6-moon system in space-zeppelins, dangerous infiltrations of the Coalition, bartering with thieves, and relying on the seedy underbelly of the 6-moons. Anything it takes.

But … is the whole set up a trap? How many snares will Holly and her crew have to spring to the save just one victim?

This is Holly Drake and her crew of thieves. If they have to, they’ll go into the hornet’s nest to get the job done. But will it be their final job?

The Hands of the Colossus features a snarky, strong, bad ass heroine fighting against the odds to save the helpless.

If you don’t like seeing a woman experience self-doubt, overcome obstacles, and then dominate, this book is not for you.

Love strong female leads, an entertaining cast of characters, and adventure? Then grab your copy today!

“What do you think, Trip?” Holly Drake asked. She glanced at the pilot of the ship the SC Olavia Apollo. The female was a Centau, which Holly would have never imagined using in her life. However, tech genius crew-member Darius had sworn that she wouldn’t compromise the operation and turn over their illegal activities to the Centau leadership. Despite his scoundrel ways, Darius had proven himself enough that Holly trusted him. “Can you do it?”

The Centau turned to the stare at Holly, where she sat in the co-pilot seat, and smirked. “‘Think I can do it?’ What sort of question do you ask me, Drake?”

“A nervous question. I hate space-flight.”

“Yes. So you’ve said. Repeatedly.” Trip’s dark gaze flickered over Holly’s face, then went back to the monitor.

Charly was already suited up in the air-lock and waiting, while Odeon was strapped in behind Holly, humming. This mission wasn’t the sort that lent itself to drinking for nerves. Was it a terrible thing to ask her Druiviin friend that he hum to help her through the ordeal?

Probably. But there weren’t a lot of options at the moment.

“You needn’t worry the least. Centau ships are the most advanced in the known galaxies. He’s mapping the gravity of this misshapen moon as we approach for landing. It won’t even be rough. And I will have very little to do with the actual landing. It is in the hands of the Olavia Apollo’s AI.” Trip gestured at the video image of the moon on the monitor as they approached.

It was a small one, indeed. Around seven and a half miles at its longest and as lumpy as a potato-tuber hybrid. Darkness and unfiltered sunlight gave the moon’s surface relief, revealing its pockmarks, scars, and vast gouges. There were several transponders attached to the surface. These transponders were what had brought Holly and her team to the small moon in the first place.

Holly held her breath as their ship, in some mysterious advanced physics and engineering, slowed upon nearing the touchdown. A low noise began suddenly, whining through the background sounds of the ship’s systems. Holly looked around, panic rising as the danger seemed to grow.

“What is that?” she whispered, clutching the hard cushion of the edge of her seat.

A calming violet hand appeared on her shoulder. She could see it in her peripheral vision.

“It is you, Holly Drake,” Odeon said. There was a song in his voice, and a slight tone of humor. “Peace. You are nervous. All will be fine.”

Trip’s gaze was also on Holly.

“Shouldn’t you be watching this landing?” There was a definite edge in Holly’s tone. No peace at all.

“The AI. If I interfere, I could ruin the landing. Olavia Apollo has it.” Trip nodded at the sleek control board. “Don’t worry.”

The first time they’d ridden with Trip, Holly had expected wood, brass, and a large steering wheel—like the space zeppelins. Not at all what she found. Instead the small space cruiser was something right out of the future. Trip barely even piloted it.

That didn’t stop the Centau from wearing a white jumpsuit with patches on the upper arms and a pair of goggles with amber tinted lenses. Right now the eye-pieces were on top of Trip’s ivory stubble-covered head as she watched the surface of the moon float toward their ship on the video image on the screen.

“What is it you want to do with the transponders?” Trip asked. She watched the video footage onscreen as they moved closer to the surface.

A knot tightened in Holly’s gut. Her stomach stretched taut. Her shoulders arched back against her seat slightly. Odeon’s hand burned through her jacket, seeming to heat up as the tension tore through her body. She wasn’t sure what she feared—crashing too hard into the unforgiving surface of the moon or their ship ripping apart and sending them all careening into the void of space, like flecks of ice off one of the un-terraformed ice moons of Ixion. The one they were about to land on was one of the few asteroid-like moons, and therefore peppered with transponders on all sides, repeating audio and video signal through the 6-moon system.

If Odeon’s hand hadn’t been there, if Odeon’s low song hadn’t been worming its way into her ears, digging deep into her brain, pirouetting across her neurons like an ancient earth-ballet dancer, soothing her like a pied-piper of lore, Holly knew that she would have been nothing more than a puddle of adrenalin, dispersed through the low-G-interior of the ship, floating around like rain drops.

The ship balanced, thrusters fired, a harpoon-like anchor ejected and tethered their ship to the rock and they connected with the moon in a light thud, touching down.

I’m passionate about human rights, animal rights, and living life with no regrets. I love how becoming a parent has deepened my devotion to making the world a better place. I do that best by crafting stories that attempt to answer hard questions–the ones I think about most–while also being entertaining and fun. I live in a landscape that reminds me of my place in the universe, under an endless sky and towering mountains that are older than human memory, and I love it here.