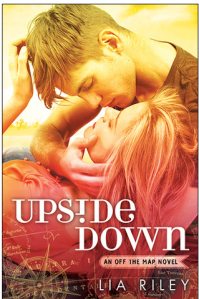 If You Never Get Lost, You’ll Never Be Found

Twenty-one-year-old Natalia Stolfi is saying goodbye to painful memories—and turning her life upside down with a trip to the land down under. For the next six months, she’ll pretend to be a carefree exchange student. Everything is going to plan until she meets a surly surfer with hypnotic green eyes, and the troubling ability to see straight through her act.

Bran Lockhart is having the worst year on record. After the girl of his dreams turned into a nightmare, he slunk back to Melbourne to piece his life together. Yet no amount of disappointment could blind him to the pretty California girl who gets past all his defenses. He’s never wanted anyone the way he wants Talia. A single semester abroad won’t  cover something this serious. But when Bran gets a stark reminder of why he stopped believing in love, he and Talia must decide if what they have is once-in-a-lifetime . . . or if there’s a plane to California with her name on it.
Goodreads: https://www.goodreads.com/book/show/18733288-upside-down?ac=1

Five Fast Facts about Lia Riley, author of UPSIDE DOWN (Off the Map #1)

1. UPSIDE DOWN is set primarily in Australia. What do you think it is about Australia that so captivates people’s imaginations? And why is Australia the perfect place for romance?

I jumped on a Qantas flight the month before my twenty-first birthday for a study-abroad trip. My expectations were simple: cross the equator, pass the International Date Line and rock out (er, study REALLY HARD) for six months. Instead, I discovered a place that has become my second home.

First and foremost, I love Australians. I mean that quite literally. I married one–the perfect souvenir! Generally speaking, Australians excel at dry wit and have one heck of an anti-authoritarian streak. To me, nothing is sexier than a sense of humor, and when the guy making the jokes has a hot accent and cheeky grin?  Life=made!

Secondly, to say that Australia’s landscape is dramatic is an epic understatement. The continent’s isolation has spawned animal, plant and human diversity that are like nowhere else on the planet. Even a quick jaunt into the wilderness yields a bone-deep sense that you are in an ancient place.

This is a country of extremes. When it’s hot, it’s bloody hot. When animals are poisonous, it means they can kill you with one bite. When there’s a storm rolling in from the Southern Ocean? Those waves are going to be huge.

So if you fall in love in such a place? Buckle up–the ride’s going to be intense.

2. What are three words describe your hero? Heroine?

The three words I’d choose for Bran are:

The three words I’d choose for Talia are:

3. Can you describe your book in five words or less?

4. What did you do before writing?

Drink less! I kid, I kid. But if you ever want to see a KICKASS Michael Jackson lip-synch, slip me a bottle of tequila. I can “Man in the Mirror” you to tears. I have worked in non-profit middle management, as a legislative assistant, and barista. I’m pretty sure my mom believes I still “pour coffee.”

I have a massive Antarctica fetish (I’ve been once. A penguin sat on my lap. Yes, it was bliss). My ultimate trip would be to South Georgia Island smack dab in the Southern Ocean. I’d also love to visit Madagascar, Iceland, Svalbard, Palau…islands are sort of my thing.

Lia Riley writes offbeat New Adult Romance. After studying at the University of Montana-Missoula, she scoured the world armed only with a backpack, overconfidence and a terrible sense of direction. She counts shooting vodka with a Ukranian mechanic in Antarctica, sipping yerba mate with gauchos in Chile and swilling fourex with stationhands in Outback Australia among her accomplishments.

She and her family live mostly in Northern California.